Edinburgh Scholarship Online requires a subscription or purchase to access the full text of books within the service. Public users can however freely search the site and view the abstracts and keywords for each book and chapter. Please, subscribe or login to access full text content. To troubleshoot, please check our FAQs , and if you can't find the answer there, please contact us.

University Press Scholarship Online. Sign in. Not registered? Parenthetically I wonder here if there is a significant difference be a machine and a flow. Can a flow be conceived as a machine so that machines only act on other machines, connecting and disconnecting to form always new machines? Or are flows distinct because passive as opposed to the activity of machines?

I would tend towards thinking they are at base the same, but I'm not sure about this. In any case, this is all part of what I'm proposing as the second important aspect of the machines, that they do not have subjects or objects in the conventional sense. Let me read a passage that links this back to the first aspect of machines. In other words, producer and product have the same essence, and that essence is production. Once again, the schizophrenic is the one who recognizes this truth about being. There is no need to distinguish here between producing and its product.

We need merely note that the pure "thisness" of the object produced is carried over into a new act of producing" p. All is production, and producer and product are indistinguishably absorbed into this process.

The first two reasons I've given for why using the concept of "machine" were both really negative: first to separate it from the division between the human and the natural, and second to highlight the lack of subjects and objects producer and product in the functioning of the machines. The third and most important reason for using the concept "machine" is more straightforward and positive, and that is to emphasize the productivity of being.

Being is not a fixed thing but a continually modulating process. This third aspect seems clearer to me and not in need of much explanation. At this point the connective synthesis should be rather clear. Machines connect one to another to form together new machines. And because the first machine is in turn connected to another whose flow it interrupts or partially drains off, the binary series is linear in every direction" p. All the machines are capable of potentially infinite connections in all senses.

Desire All of this about machines sets up the central question, which is about desire. I know that they don't always use it this way, but I think it makes no sense to talk about "desire" per se in this framework. There is no such thing as desire, only desiring-machines. I mean by this that desire has to be given the same attributes that I just claimed belong to machines. First of all, desire as desiring- machine is not a thing but a process, an act of producing. That's rather straightforward and not so different from other notions of desire. Second, desire as desiring machine has no subject and no object. 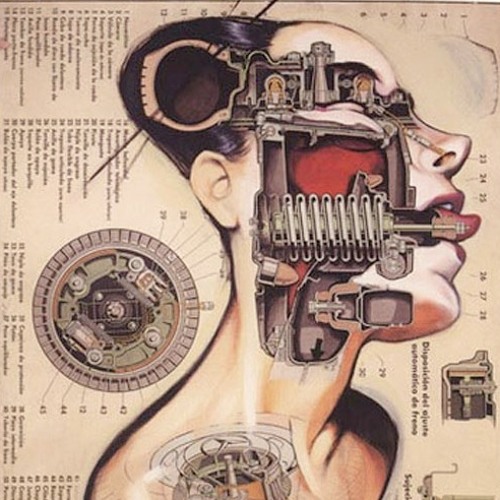 For example, the statement "the boy desires to have sex with his mother" is completely out of context here. In this framework there is no subject that has the desire or the desiring-machine, nor can desire really function as a verb unless somehow it could be a verb refering to no subject. The subject does not exist before desiring-machines but only after, as an effect or residue of production. Perhaps precisely because desiring machines are asubjective, with no subject behind them, we cannot conceive of the object of desire in the same way.

Desiring- machines cannot be conceived as a desire to do or have an object or even achieve a state. Hence "the object of desire" really doesn't make sense here. Desiring-machines have no object, or goal, or telos, but rather are completely invested in the process, the production.

Lack is not cause but a result. Paradoxically, Desiring Machine suggests a pre-modern Aristotelian conception of nature as an animate libidinal plurality awash with purpose, striving and desire. Desiring Machine side view, photography: George Apostolidis.